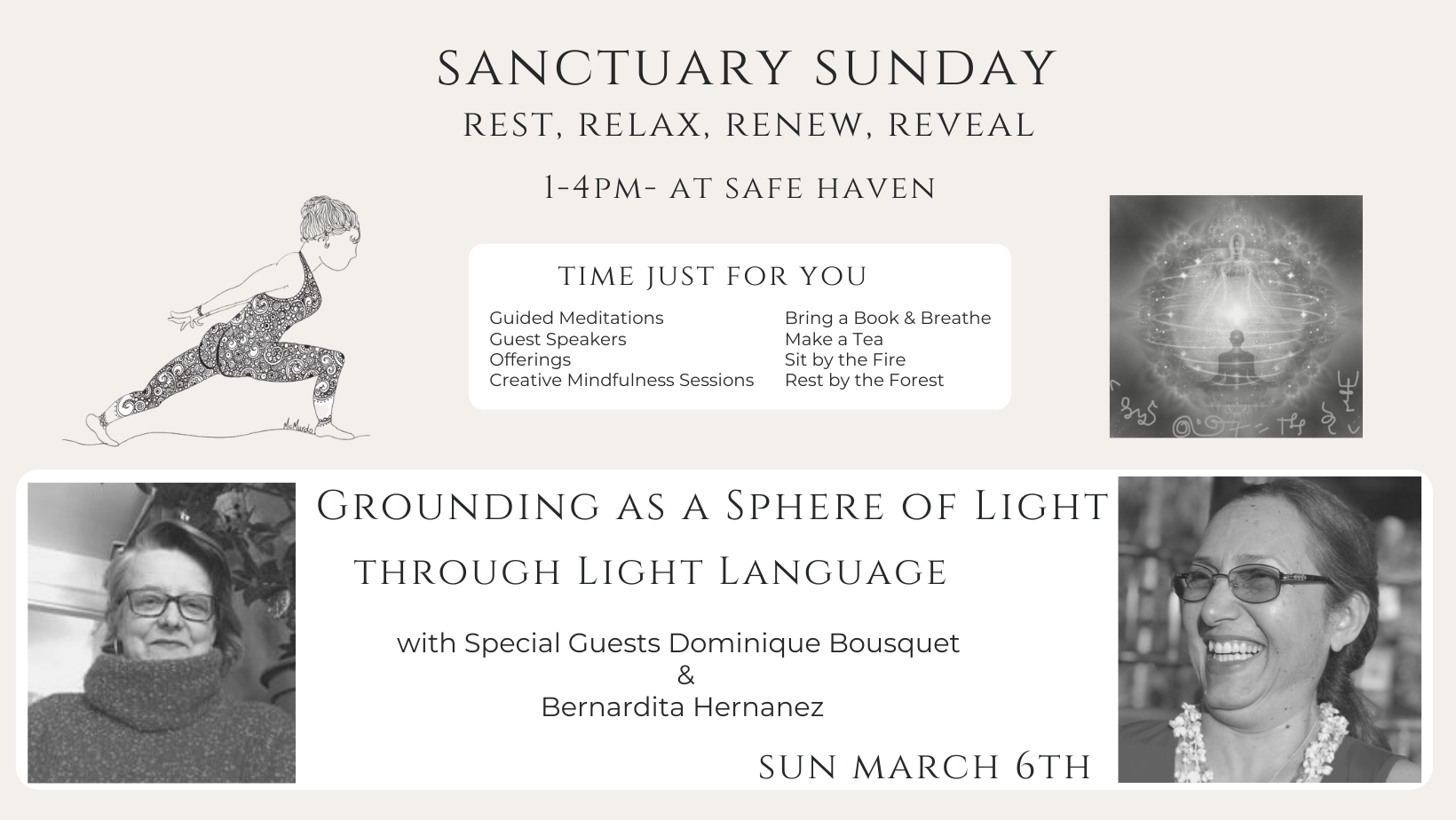 Sanctuary Sunday- Grounding as a Sphere of Light through Light Language

Sanctuary Sunday- Grounding as a Sphere of Light through Light Language

We are made of energy. Being grounded is having a solid connection with Mother Earth and being in touch with nature, our nature & our humanity. Grounding is a means to stay in the present moment with our thoughts, our feelings, our actions and our extra sensorial capacities. In this world in which we are living, feeling grounded is paramount.

Grounding is a means to embody our spiritual being-ness, to connect with the heart. It is a way to balance our field of energy, preventing negative thought forms and other forms of negativity from entering into our experience. Grounding contributes to our evolution and light expansion,  eventually affecting the kinds of actions we take.

Grounding provides physical, mental and emotional balance as well as a general sense of well being and stability. It is a deeper sense of connection to our immediate surroundings, Gaia and the Cosmos.

Light language activates the innate strength within each person by stimulating all vibrational vessels to align with the higher self & to release emotional patterns or any blocks that may be holding you back from living in fullness and optimal health.

“Some people speak Light Language, some sing it, some sign or draw or write it, as light maps or codes or inscriptions. It’s called “light language” because that is how it appears to the inner eye as the practitioner is speaking—words that are on fire or really lit with gold. Some say they are channelling light language from other beings in other realms or star systems; some say that it comes from their higher self. Some believe that it is both: Those “alien” beings are fractals of their own self. Each person has their own style of expression as distinct as their voice, as distinct as the beings or aspects they are bringing through them.” (Courtesy of “What is Light Language? A Celestial Communication for a New Era,” Laura Marjorie Miller, Enchanted Living, Date Unknown.)

Please join me in welcoming very special guests Bernardita Hernanez & Dominique Bousquet to Safe Haven. During this Sanctuary Sunday, we will explore the connection with our physical body, with Gaia or Mother Earth and with the Cosmos, in a sphere of light that Bernadita and Dominique will create for us. They will connect to our collective and individual energies. Downloads and messages will be shared, energies exchanged, and a concert of Light Language enjoyed by all.

This event is in person at Safe Haven, with limited seating. Ticket registration is below. See you at Safe Haven!

Dominique Bousquet is a visual artist and energetic practitioner .It all started around 1995 during the night she was awakened  briefly by fingers tapping on the crown of her head. That was it! Her search began. She started to be more interested in the invisible world, the energy around her. She took many classes, like Reiki, Connection Divine, the Reconnection, hypnosis, chamanism, Lecher antenna, etc. She gave tibetan bowl concerts, hypnosis sessions, seances, to name a few. While taking  part in a ritual, she started to  sing in an unknown language. She had no idea at that time that The Light Language was being integrated in her life. Bernardita and she joined to create meetings with the Light Language. As for her artistic side, she has been drawing funny symbols for a long time…one might think they are codes. She paints intuitively. She also is a surface pattern designer and draws digital motif/ patterns to be sold in her 3 online boutiques, one of which can be found here: https://www.redbubble.com/fr/people/jintonai/shop

Her philosophy is to have fun, because life is fun, and share that energy with others through colours and different projects. She works with the pendulum, does Aura readings, gets visions while looking at a person and then transmits the Light Language. She is discovering a part of herself that she did not know was so powerful and unpredictable. Dominique is a caring vibrant being, loved by many, & her work is greatly admired.

Bernardita has been an energy practitioner for almost 40 years through different modalities such as crystal work, polarity, Reiki, hypnohypnosis, Postural Yoga &  lIght language, to name a few.  Through light language and the support of Guides of Llight, she can bring the person to higher states of consciousness as well as a greater connection to the soul and deeper levels of awareness and well being. Light language are sacred sounds that vibrate from the soul through a given intention.  Bernadita has been practicing light language with her hands for many years without knowing that it had a name. In 2019 audible light language became apparent and soon its power became very clear in her already existing work. As an empath, she has great sensibility to the energy of others, that gives her the capacity to read energy vibrations.

Participants are asked to bring a journal and their favourite pen. Please arrive early so we can start promptly at 1pm. Looking forward to spending a Sanctuary Sunday with you at Safe Haven.

Liked it? Take a second to support safehavenforest@gmail.com on Patreon!